Whenever Moldova features in international media, it is often referred to in superlatives.  However, many of those are rather negative:  poorest, most corrupt, least developed country in Europe. Apart from historical and geographical factors, a long series of policy failures have led to a state of despair that leaves the older generation nostalgic about the soviet past and demoralizes the youth into fleeing their country in search of a more dignifying existence.  This is the Moldovan story of the last two decades.  As in most cases, people blame the politicians for all the failures. Yet, few are comfortable with the thought that people get the governments they deserve.  So, this post will attempt to outline what kind of government Moldovans get, before we can later explore what it is they believe they deserve. 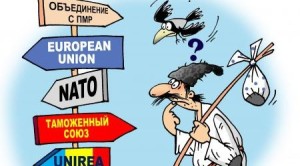 ent and parliament. The judiciary is independent of the executive and the legislature. The position of the breakaway republic of Transnistria, relations with Romania and integration into the European Union dominate the political agenda.  However, real political life is way more complicated and, therefore, more interesting than that. But before we delve into the subtlety of Moldovan politics, gaining a glimpse of theoretical standing would be of much help. I, personally, found this methodological approach to Moldovan realities quite persuasive.  Please bear with professor Lucan A. Way, who wrote this paper back in 2003 on a Harvard research grant.

“Moldova’s weak state, tenuous elite networks, and polarized politics have provided key sources of democracy in the post- Soviet period. In the face of a weak civil society, severe economic decline, civil war, low income per capita, and an absence of a democratic history, Moldovan democracy in the 1990s was stronger than in any other non-Baltic, post-Soviet republic. The country is best understood not as a struggling or unconsolidated democracy but instead as a case of failed authoritarianism or “pluralism by default.” In cases of pluralism by default, democratic political competition endures not because civil society is strong or leaders democratic but because politicians are too polarized and the state too feeble to enforce authoritarian rule in a liberal international context. In such cases, the same factors that promote pluralism may also undermine governance and state viability.”

Coming from a political science background myself, I cannot help but applaud professor Way for hitting the nail on the head.  Over a decade later his thesis only gained further validation.  Not only did Moldova become a pluralist society by default, it also became a country by default.  Moldova never before it its history enjoyed independence prior to the collapse of the Soviet Union. Thus, sovereignty was largely bestowed upon us by the circumstances.  The national revival movement of the late ‘80 was, no doubt, important, but it was also mainly a result of Gorbachev’s perestroika.  Then, because there was no alternative competent and strong enough to run the country, local communist bureaucrats were faced with a tremendous challenge. They had to rule a new country in a completely new fashion – democratically. Forget the transition from planned to market economy for now.  Moldova is still undergoing that transition.

Moldova, much like the rest of former USSR, with the notable exception of the Baltic States, muddled through the new realities without a clear scope of direction.   It is only recently that European integration has become a national project of sorts. Still, given Moldova’s highly polarized society and, therefore, political class; EU integration has become a much contested vector. Russian driven Eurasian Union is presented as an alternative. Given the recent geopolitical shift over Ukraine, the debate is only going to further polarize the society and, despite promoting democratic pluralism, it will inevitably undermine governance and state viability – something that has unfortunately become a daily routine.

This entry was posted in Moldova, Politics and tagged EU integration, Moldovan politics, pluralism by default. Bookmark the permalink.