Is Any Truth or Dignity Left in Vladistan?

If Putin’s Russia is an iron fist ruled Vladimirland, then Moldova can surely be regarded as a feather-headed Vladistan – a triumvirate of Vlad Filat, Vlad Plahotniuc and Vladimir Voronin.  For about five years now Moldova has been facing a crude reality of three people indulging their egos at the expense of the entire country. The three are seasoned politicians with shrewd instincts.  Yet their mutual coexistence is not by choice. Each of them would prefer to see the other two go, but no one is ready to retire just yet, not even septuagenarian  Voronin, as for the other two – they are just getting started.

It is the two ‘young bucks’ that are causing the biggest stir in their struggle for supremacy. The country barely recovered from the previous bout the two had in 2013, following the ‘Huntingate’ scandal, when both Filat and Plahotniuc lost their public offices in a war of mutual destruction.  It would not have been that huge of a deal if the two settled their differences without employing the full arsenal of government machinery at their disposal with complete and utter disregard for the separation of power or rule of law. In fact, their last feud left the country paralyzed for half a year and destroyed any prospects of foreign investment coming into the country. Moldova quickly became the laughing-stock of the region and its EU related success story began falling apart at the speed of light. Development partners are shrugging in disbelief.

This new round of trepidations may cripple the country even further to the point of major social conflict resulting from brewing public resentment towards these powerful oligarchs who are protecting their political and business interests at the expense of the public good. Despite Moldovans being rather peaceful people, there are plenty of forces eager to capitalize on public frustration in an attempt to channel public anxiety towards more radical measures.  So far, major public gatherings have been peaceful, yet Sunday June 7th rallies in the main square of Chisinau tested the people’s restraint to the limit. The two competing crowds were heated up, but luckily no excesses occurred this time.

The ‘Truth and Dignity Platform’, which, unsurprisingly, is turning into a political party, is gaining momentum as the only force willing to stand up to power. Yet, unfortunately, the Platform does not inspire a lot of trust either.  It is not a genuine grass-roots movement, rather an orchestrated display of frustration, somewhat similar, but of lesser quality than PLDM’s anti-Communist marches of 2008-2009.  Instead of mobilizing people from across the political spectrum, the movement is overtly right-wing, which only serves to boost the already powerful leftist front covered by the Socialists and, to a much lesser extent, by the Communists.  The fact that Liberals attacked the Platform is logical, though the timing could not have been any worse as it may potentially, though still unlikely, cost Chirtoaca the mayoral election. Chirtoaca is, after all, the luckiest politician alive. If only the left was not split, Grecianii would have easily won by a landslide.

Now, the most troublesome development of the last few days has been Prime Minister’s surprising announcement, demanding for the Prosecutor General, National Bank Governor and Head of the National Stock Market Regulator to resign/be dismissed, not quite clear, otherwise he threatens to resign himself. As the holders of those offices are quasi-irremovable, I assume, the prime minister is counting on honorary resignations. Yet, as those almost never happen in Moldova, the gesture amounts to a futile PR stunt at best, paving the way for his own ‘honorary resignation’ or a carefully planned attack, triggering a new cycle of political instability at worst.  The language of the letter and the fact that it was posted on his Facebook account on Saturday evening diminishes the solemnity of the moment and makes it look awfully disingenuous.   I would like to give him the benefit of the doubt, but, given his appointment process and his record in office, unfortunately, I have exhausted all of my good will. 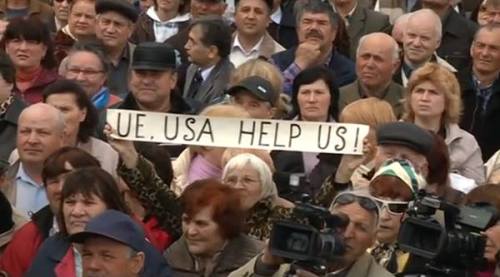 One response to “Is Any Truth or Dignity Left in Vladistan?”