September 6, 2015 protests in Chisinau may become a turning point in Moldovan political history just as well as they can fade away as if nothing ever happened.  So far, organizers appear determined to follow the history changing course, but in light of Moldovan electorate’s erratic unpredictability, it will be a tall order.  Moldovan government and the entire ruling political establishment will not stay idle either.  In fact, last-ditch effort to undermine the protest by suspending the hike in electricity, gas, and bread prices; coupled with a desperate attempt to lure the public with two mega concerts in Chisinau and Orhei proves that the ruling elites are vulnerable. Yet, appearances are deceitful.

Despite tremendous international media coverage by Reuters, BBC, Euronews, TheGurdian and even FoxNews and Russia Today, protesters can only rely on JurnalTV for extensive national coverage. Thus, national impact of the rally is limited by political control over most media outlets. Yet, social media compensated for some of that loss. Still, the protest itself organized by the ‘Civic Platform for Truth and Dignity’ poses many questions. It is no wonder because there is little truth or dignity left in Moldovan public sphere.  First and foremost, organizers grossly exaggerate with the number of attendees, rounding it up to 100000. At the other extreme, detractors counted less than 10000. The actual number is difficult to estimate, but an honest guess would be around 30-40 thousand, which is still impressive for a non-political rally.  Then again how non political is it when the main demand is resignation of the president and early elections?

Personally, I was taken aback by the sudden change of tone and the inexplicable demand for the president to resign. Timofti was the last person who had anything to do, if at all, with the stolen billion and the endemic corruption of the ruling elites. His main flaw is not asking many questions, but that was the deal from the moment he was voted three and a half years ago after a record-breaking 917 days vacancy. It makes no sense to go after the President who only has six months left of his term, when the real culprits of state capture run amok.  Furthermore, if, suppose, the president were to resign; his place will be temporarily filled by Speaker Andrian Candu – Plahotniuc’s protégée. Then, given the high threshold for electing a president, Candu may hold the two most important offices in the country for quite some time. The alternative being that early parliamentary elections are called in due time after failing to elect a president, but how will this solve Moldova’s problems or at least mitigate them? 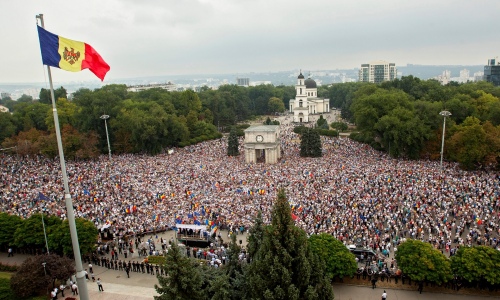 There is yet no tangible political alternative to the current main political parties. In fact, early elections could as well produce a leftist government bent on changing Moldova’s foreign policy course, which will inevitably cause major popular unrest. The Platform appears short on creative ideas. It seemingly lacks a strategy and only goes with the flow. This is unfortunate because thousands of people who manifested their defiance to the government on Sunday, and many more at home, genuinely hope for a change. Sadly, if Moldovan political history is any indication, we are all up for another upset.