Talk of Reunification Opens Risks and Opportunities for Protest-Ridden Moldova

At the height of recent anti-government protests in Chisinau, some Moldovans in the crowd may have hoped for Romania to intervene; but the Russian state media made it sound as if it this were a real possibility, if not an actual plan in Bucharest (Pervii Kanal, January 24). In response, the former Romanian national security advisor to then-president Traian Băsescu, Iulian Fota, argued in an editorial that Romania should not cross the river, but focus instead on becoming “better” and not necessarily “bigger” (Ziare.com, January 26). In reaction to Fota’s remark, Moldova’s Defense Minister Anatol Șalaru, a leading member of the Liberal Party and a devoted unionist, responded that Romania cannot possibly become better without growing bigger by rejoining with Moldova (Deschide.md, February 2). Responding to Fota’s concerns about Russia’s potential reaction, Șalaru confidently rejected claims that Russia would attack the North Atlantic Treaty Organization (NATO) in reaction to Moldova’s union with Romania. This exchange is significant not only for the fact that it involves leading national security actors from both countries, but also because of the context in which it is occurring—namely chronic political instability in Moldova and the wider region.

No other issue has been more divisive in Moldova’s quarter-century history of independence than reunification with Romania. Very few countries have separated amicably in recent history—Czechoslovakia being the primary example—and hardly any merged together in a peaceful and democratic way other than Germany. Both examples were, however, a byproduct of the collapse of the Soviet Union. Hence, many in Moldova argue that a golden opportunity was missed in the early 1990s. The 2014 Scottish independence referendum set a modern-day example of democratic self-determination in Europe, however; and there is presently increased talk in Moldova and Romania about a potential union. The discussion itself is not new, but the circumstances clearly are. Previous Romanian president Băsescu declared that “Greater Romania” should to be his country’s next big project, raising eyebrows in European Union circles (Unimedia, November 27, 2013; EurActiv, December 2, 2013). Last year, 41 Romanian lawmakers set up a “Friends of the Union” faction in the parliament, an initiative of the “Action 2012” Platform—a coalition of a couple dozen pro-unionist groups from across both countries and the diasporas (Adevarul, February 11, 2015; EUObserver, March 5, 2015).

The leader of this platform, George Simion, was expelled and banned from entering Moldova for five years on national security grounds in May 2015, only to be cleared by a Chisinau court in September. However, when attempting to enter Moldova on February 5, 2016, he discovered another interdiction was in place since January. Yet, surprisingly, the ban was lifted the following day after Moldova’s new prime minister, Pavel Filip, intervened (Publika, February 6). Simion is scheduled to appear in court on February 9. Despite all the legal trouble, Simion is planning a major event in Chisinau, on March 27, the anniversary of Bessarabia’s 1918 union with Romania. Moreover, the movement “Union-2018” is shaping up to create further pressure for reunification by the one hundredth anniversary of the historic event. 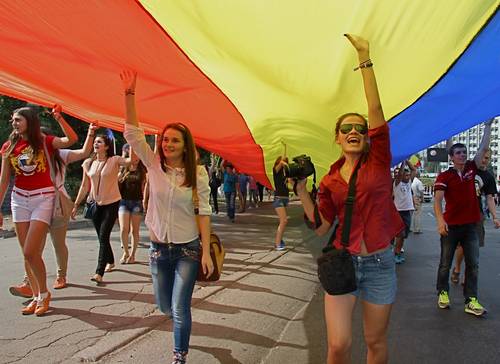 Moldovan authorities tend to ignore pro-unionist marches, even though many in the ruling coalition are sympathetic to the cause, particularly the Liberals. Nonetheless, leading figures in the pro-Russian opposition are increasingly anxious. Socialist leader Igor Dodon, in an interview with the Russia newspaper Komsomolskaya Pravda, accused the United States of masterminding the “Union-2018” plan to merge Moldova into Romania, even at the risk of civil war (Komsomolskaya Pravda, February 3). Dodon also pointed out that a union with Romania is becoming increasingly popular among Moldovans against the backdrop of rampant corruption and worsening economic conditions. Indeed, the seemingly never-ending, yet still fruitless, protests against kleptocracy and state capture may swing the mood of Moldovan voters toward considering the unification option as a viable solution. At least two non-parliamentary political parties—National Liberals (PNL) and the newly created Right Party (Dreapta)—are proposing just that. Though all this is much easier said than done.

For some, the proposition is certainly appealing. Unlike the Republic of Moldova, which has been struggling through transition without a clear sense of direction, Romania is now a full member of NATO and the EU. In economic terms, Romania’s per capita GDP is six times that of Moldova, while average monthly pay is two and a half times above what people earn east of the border (Imf.org, accessed February 9). Thus, one might expect Moldova’s population of three million, excluding Transnistria, to naturally gravitate toward reunification; but only 21 percent actually support such a course, according to a recent poll (Ipp.md, December 8, 2015). History, identity and geopolitics are overshadowing any considerations of potential economic gains. Indeed, debate on the issue is often emotionally charged and lacks analytical rigor. Any attempt to rationalize the problem is met with fierce criticism, bordering on accusations of lack of patriotism.

An almost guaranteed lack of consensus exists in both NATO and the EU regarding a theoretical Romanian-Moldovan union; and Romania’s own neighbors, Hungary, Bulgaria and Turkey, would likely oppose such a plan. But even if Washington and Brussels were onboard with a reunification agenda, Moscow nevertheless remains the elephant in the room. Barring Russia’s (unlikely) imminent collapse, only under a major quid pro quo between Russia and the West could such an agenda begin to materialize in the foreseeable future. In addition, the issue of Transnistria and that of the Russian-speaking minorities in Moldova proper would complicate such an agenda even further.

Nevertheless, these concerns have not precluded the speaker of the Moldovan parliament, Adrian Candu, from raising the idea of a reunification referendum during a public event in October, saying, “I think we should put several issues to a referendum: those concerning the election of the President, [and] even those regarding the union. Why not let the people say if they want this? And we shall accept the results and comply with them” (Timpul, October 14). Indeed, given how contentious the issue has been and how combustible it can become, a meaningful public discussion about a future consultative or even constitutional referendum could mitigate some of the existing tensions. Much like in the case of Scotland, a referendum would put the issue to rest, one way or the other. One could argue that Moldova lacks enough political culture and liberal tradition to peacefully and democratically engage in such a responsible, complex and sensitive debate. But the question remains: “Is there a better way?”

Note: The original article was written for the Jamestown Foundation and can be accessed here.