Moldova Torn between Past and Future Ahead of Presidential Run-offs

On October 30, 2016, for the first time in 20 years, Moldovans went to the polls to elect their president directly. Before the March 2016 Constitutional Court ruling, which reintroduced direct elections, it was the national legislature that elected the head of state, provided that a 61 vote majority could be reached in a Parliament of 101 members. Unsurprisingly, the three fifths majority was hard to achieve in an increasingly divided and partisan political climate. This situation was, in turn, a result of a proportional electoral system typical to a nascent post-Soviet electoral democracy plagued by paternalism, corruption, and parochial political culture.

In light of hasty constitutional change, viewed by many as an attempt by the government to defuse the opposition protest movement sparked by the infamous billion dollar scandal, the campaign season was very short. Of the 24 candidates who ventured into the race, only twelve were able to collect enough signatures of support in order to be registered by the Central Election Commission. Of those twelve, only nine made it to election day. Two candidates withdrew, and the third one was excluded by a court ruling on charges of breaking campaign finance laws. Still, according to polls, only four candidates had an actual chance of winning: Igor Dodon, Maia Sandu, Andrei Nastase, and establishment candidate Marian Lupu. In a highly anticipated, yet nonetheless astonishing move, one of the leading candidates, Andrei Nastase—a civic protest leader turned politician, currently heading the center-right Dignity and Truth Party—withdrew in favor of Harvard-educated World Bank economist and former Education Minister Maia Sandu, leader of the center-right Action and Solidarity Party. Sandu (aged 44), arguably the most influential female politician in the country’s history, is running on a platform of integrity and social inclusion underpinned by a pro-Western foreign policy. She draws her support primarily from forward-looking, more educated younger urban voters. 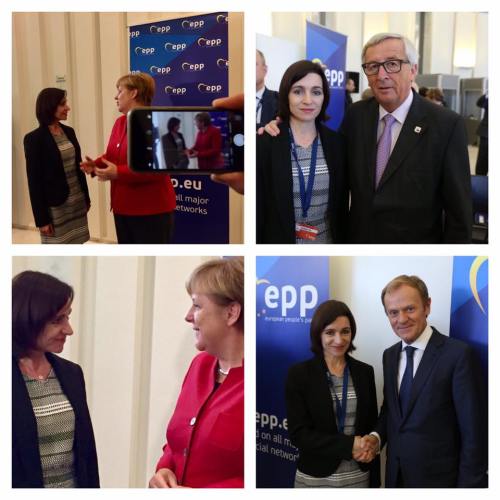 However, an even more surprising withdrawal occurred just four days before the election as Chairman of the ruling Democratic Party, Marian Lupu, left the race endorsing Maia Sandu. Yet, unlike Nastase’s support, Sandu rejected Lupu’s endorsement and that of his fellow party member Vlad Plahotniuc, often regarded as Moldova’s oligarch-in-chief. According to polls, Plahotniuc is the most hated national politician, ubiquitously accused of having captured the Moldovan state. Thus, his endorsement was toxic for whoever was on the receiving end. The move clearly benefited Sandu’s opponent, Socialist leader Igor Dodon, who lost no time in labeling Sandu as not only Washington’s candidate, but also Plahotniuc’s puppet. However, evidence suggests that Plahotniuc’s support for Sandu was only declarative since the media empire he owns and the Democratic Party he controls remains neutral at best, if not actually covertly supporting Dodon. Despite being a leftist, front runner Igor Dodon, is hardly progressive when it comes to social issues. He promotes religious conservatism, having received Russian Patriarch Kirill’s personal blessing as well as the support of Moldova’s Orthodox Church. Dodon (aged 41) has campaigned on a platform of family values, social equity, and a pro-Russian foreign policy. He relies mostly on the nostalgia of the older generation and the anxieties of the Russian speaking ethnic minorities.

First Round Results and Prospects for Run-offs

Following a campaign season of just one month, according to first round results, Igor Dodon received 48% of the vote, and Maia Sandu received 39%. They will be facing each other in the run offs on November 13. Despite a turnout of only 49%, the results were closer than expected largely because two prominent candidates, Nastase and Lupu, left the race. In fact, had there been another withdrawal, particularly of the candidate who came in third, Dimitrii Ciubasenco, Dodon would have likely won the presidency in the first round. Ciubasenco, who received 6% of the vote, is backed by a pro-Russian populist party led by controversial businessman Renato Usatii. Usatii, who recently fled to Moscow to escape an arrest warrant, already announced his endorsement of Dodon. Thus, Dodon remains a favorite for the runoffs. However, Moldova’s last direct presidential election, which occurred in 1996, coincidentally also had nine candidates and produced a major turnaround as the first round underdog ended up beating the front runner 54% to 46%. Similarly, the current president of neighboring Romania won the 2014 runoffs after initially losing by a 10% margin. Sympathetic local pundits are all too eager to compare Romania’s Klaus Iohannis to Maia Sandu. Both were political outsiders running on a platform of integrity. Both received significant grassroots support augmented by successful social media outreach. Yet, the differences are also apparent. Iohannis ran against an unpopular incumbent prime minister. While, oddly enough, Sandu and Dodon are both in opposition to Plahotniuc’s regime. Both contenders are caught in a public relations tug-of-war as to who does Plahotniuc’s bidding and who is a true opposition candidate. Sandu, backed by Nastase, a sworn enemy of Plahotniuc, appears to have a more persuasive case, but she can hardly compete with Dodon in terms of media access and funding, not to mention Plahotniuc’s thumb on the scale. Sandu has one major advantage that she has so far refused to capitalize on—a credible pro-European Union message and strong support in Brussels including an endorsement from the European People’s Party, the most powerful political organization in Europe.

It is well known that elections in Moldova have increasingly become a referendum on the country’s foreign policy. The communists came to power in 2001 thanks to a pro-Russian agenda, only to lose power in 2009 to a coalition of parties running on pro-EU rhetoric. Since 2009, the center-right, pro-EU parties have defeated the left (communists and then socialists) in three parliamentary elections and two local elections. All of these elections were fought along geopolitical fault lines. It had come to the point where the mayoral race in the country’s capital, Chisinau, was transformed into a referendum on foreign policy. Igor Dodon knows it all too well since he lost the 2011 Chisinau mayoral race, and fellow socialist Zinaida Grecianii followed in his footsteps in 2015 largely because they were perceived as overtly pro-Russian in a country which still sees its future with Europe, despite increasingly low support for joining the EU. It is noteworthy that support for the EU fell from about 70% in 2009 to about 35% after seven years of corrupt pro-EU parties in power. On the other hand, the same polls suggest that support for the Russia-backed Eurasian Union never reached 50%, hence the reason the left suffered successive electoral defeats. It may be risky to employ the strategy of geopolitical polarization again, but past experience strongly suggests that it is the most effective way to galvanize the base and increase turnout. Besides, any meaningful public policy debate in Moldova, be it on economic development or national security, is inevitably centered on geopolitics.

Dodon has clearly learned his lesson and is now veering towards the center, walking back on some of his most controversial pledges, namely to repeal the EU-Moldova Association Agreement and join the Eurasian Union promoted by Russia. The latter being almost impossible as long as Ukraine, located between Moldova and Russia, is in an open confrontation with Moscow. In light of the above, the Kremlin has abstained from openly backing Dodon this time. However, the highly influential Patriarch Kirill’s blessing serves the very same purpose as Putin’s personal support did before the 2014 parliamentary elections, which the socialists exploited to the fullest, ending up with the largest faction in parliament though not without some help from Plahotniuc. Putin’s endorsement could have carried the socialists much further had it not been for the conflict in Ukraine. Surprisingly, the ongoing hostilities in eastern Ukraine are not a major issue in the campaign. Ironically, it was Dodon who briefly introduced the issue on the agenda when he recently acknowledged Crimea as Russian territory, triggering a temporary recall of the Ukrainian Ambassador to Moldova and a vocal response from Ukrainian politicians; some called for Dodon to be declared persona non grata and threatened to impose an economic blockade on Moldova should Dodon win. Less surprising, but equally disappointing, the Transnistrian issue also fails to register on the electoral radar despite the ongoing power struggle in the region, which is set to hold its own so-called presidential elections on December 11.

What next for Moldova?

Regardless of who wins the election, in light of the increased legitimacy of a directly-elected president, the local political scene will suffer considerable shifts even if the president gains no new powers and the country remains a Parliamentary Republic. However, despite the largely symbolic nature of the presidency, these elections are important primarily because they will set the stage for the 2018 parliamentary elections, provided that ruling elites do not trigger snap elections earlier. Should Dodon win and consequently reach an agreement with Plahotniuc regarding mutually beneficial early elections, then legislative snap elections become very likely in 2017. Such a move would have direct repercussions on the country’s domestic and international trajectory. Despite their mutual public animosity, Dodon and Plahotniuc have cooperated in private on numerous occasions the latest being this past week when their two parties blocked a bill in Parliament allowing students to vote at their place of study rather than their place of residence. Blocking this bill is seen as a typical voter suppression tactic meant to harm Maia Sandu’s chances. Nevertheless, should Sandu win and offer the country a second chance by redeeming the EU integration agenda and the image of the West in the eyes of the Moldovan people, it would mark a new beginning in Moldova’s troubled political history. In light of endemic corruption and terrible political scandals, many Moldovans are craving for a referendum on decency, but, despite Sandu’s efforts, the campaign waged by her opponent has been anything but.

Note: This article was written for the Foreign Policy Research Institute and can be accessed here.