How Dodon Sold the Country and his Soul to Putin

After almost a decade since a Moldovan President has paid an official visit to Russia, Igor Dodon made his first foreign presidential visit to Moscow. Following campaign promises to alleviate the difficulties faced by many Moldovan migrants in Russia, facilitate the lifting of the embargo on agricultural produce, and move towards a lasting settlement of the Transnsitrian conflict, there have been high expectations from this visit.  Yet, Dodon returned from Moscow almost empty handed, carrying only Putin’s symbolic yet modest gift – a map of medieval Moldova, comprising not only today’s Republic of Moldova, but also the Romanian region bearing the same name. The gesture only vindicates Dodon’s revisionist rhetoric, but is hardly an endorsement of the idea, since not even Dodon takes it seriously, but only as a means to annoy Bucharest and local nationalists. After the annexation of Crimea, Moldova lost whatever strategic importance it had. Therefore, Russia would not antagonize Romania and, even less so NATO, over Dodon’s ‘Greater Moldova’ daydream. 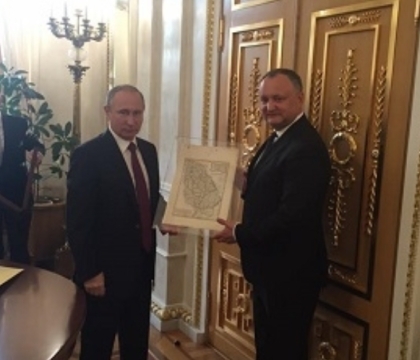 When it comes to matters of substance, Putin made Dodon no concessions as the latter has no power to offer Russia anything valuable in return, which Putin made abundantly clear during their joint press conference, when he pointed out that Dodon is largely a ceremonial president.   Thus, Dodon’s visit to Moscow has been a major PR stunt for the Socialists, with little to no benefits for Moldova. Instead, Dodon decided to thank Putin for his $100 gift by acknowledging the highly contentious $6 billion debt that Transnistria owes to Gazprom. (Moldova’s debt it only $500 million, compared to Transnistria’s $6bn, which is almost equal to Moldova’s GDP.) Of course, Dodon’s words carry no legal power, but politically, this mistake could cost him dearly. Dodon may not be familiar with the notion of moral hazard, as he is an economist in name only and a socialist at that, but imagine what incentive does Tiraspol have to pay for gas or consume less energy now that Dodon gave such a public assurance that Moldova will eventually pay for the debt Transnistria accrues. In fact, the next day Krasnoselsky announced a decision to give free gas not only to companies, but now also households in Transnistria. If you thought it cannot get more ironic that that, you would be mistaken as weeks earlier Dodon, in a highly publicized yet meaningless decree, tried to cancel the $1 billion that became public debt following the infamous banking fraud, yet he now takes on $6 billion that would bankrupt Moldova the minute such a deal is officially formalized, effectively making Moldova a hostage to the Kremlin’s will.

Battling with a severe case of Stockholm syndrome, Moldova’s president felt compelled to please Putin by promising to denounce the EU-Moldova Association Agreement as soon as the Socialists get a majority in the next parliamentary elections, which is not impossible provide that Russia generously aides Dodon in these efforts. So far, Russian has come short on generosity, failing to lift the trade embargo and even hinting that it is not going to as long as EU does not negotiate  and the other two ‘culprits’ (Georgia and Ukraine) do not repent. In stark contrast, just before Dodon’s visit, the EU announced plans to offer Moldova 100 mil EUR for macro-financial assistance to accompany the country’s new IMF programme. You do not need a PhD in economics to realize that EU’s market is three times larger than that of the Eurasian Union, with much higher purchasing power and more advanced, stable and predictable standards and conditions, yet Dodon wants Moldova to become an observer in the Union, which is nothing more than Putin’s dream of resurrecting the USSR – a true nightmare for those forced to live it.

At the end of the day, Dodon’s visit to Moscow was a big PR success and not just for the president and his party, but also for the ruling Democratic party and its newly anointed president – Vlad Plahotniuc. The Democrats lost no time and spared to effort in chastising Dodon for his anti-EU remarks and his support for a federal solution of the Transnistrian conflict. Prime Minister Filip was even featured in the New York Times and “other prestigious newspapers,” defending the country’s national interest against Dodon’s “intervention,” conveniently forgetting to mention how his party boss Plahotniuc just months ago ensured Dodon’s victory in the presidential election. Thus, apart from the risks emanating from Moscow, the pantomime staged by Plahotniuc and Dodon presents the greatest threat for the modicum of democratic pluralism still remaining in Moldova. Furthermore, the pretence of political stability rests on Plahotniuc’s role as puppeteer, but Dodon – a longtime puppet – is craving to become a puppet master himself. He hopes to achieve this goal with Kremlin’s help. It is no wonder that for a photo with Putin, Dodon was not only willing to sell his soul, but also the national interest of the country. It is only fitting that the joint Putin-Dodon press conference ended the way it did.