Is Moldova Moving Toward Russia Ahead of Parliamentary Elections?

The standoff between Moldova’s ruling Democratic Party and the country’s pro-European opposition escalated following the cancelation of a democratic election for Chisinau mayor, won by the opposition, earlier this summer (see EDM, June 27). On the dawn of Moldovan Independence Day, on August 27, after an all-night peaceful sit-in around the national monument to the country’s medieval ruler Stephen the Great, the two opposition leaders Maia Sandu and Andrei Nastase, along with several dozen pro-democracy activists (including this author), were forcefully removed by riot police at 6 a.m. The square was cleared to make room for the official flower-laying ceremony to be attended by the leadership of the country (Facebook.com/rferl, August, 27).

This marked a departure from the non-use of government force against the peaceful opposition. Until then, the head of the ruling Democratic Party, oligarch Vladimir Plahotniuc, employed proxies to break up opposition rallies. Groups of men in civilian clothing, many of them athletes, would be sent in to intimidate and derail opposition events around the country, similar to the tactics once used by the ousted Ukrainian president Viktor Yanukovych (Tv8.md, July 29). Plahotniuc also utilizes other political parties to try to sabotage opposition rallies. The party of millionaire Ilan Shor, convicted and sentenced to seven years in prison for his role in the infamous billion-dollar bank fraud (see EDM, April 10), is most instrumental in staging counter-rallies against the pro-European opposition (Infotag.md, August 26). As Shor awaits the Appellate Court decision, he remains at the mercy of Plahotniuc, known to have significant influence over the justice system (see EDM, January 12, 2016).

Ilan Shor and Vladimir Plahotniuc both share an unlikely partner in the far-right Austrian Freedom Party (FPO). An FPO member of the European Parliament, Barbara Kappel, attended the counter-rally staged by Shor against the pro-European opposition forces led by Sandu and Nastase on August 26, in Chisinau. Earlier, Kappel lobbied her fellow members of the European Parliament to meet Moldova’s Prime Minister Pavel Filip and Parliament Speaker Andrian Candu in Strasbourg, on July 2, following large opposition protests in Chisinau against the canceled mayoral election results (Tv8.md, August 31, 2018). The Austrian Freedom Party recently made international news, as the wedding of the Austrian Foreign Minister Karin Meilinger-Kneissl, nominated by the FPO, was attended by Vladimir Putin. Russia is known to have propped-up right-wing parties in Europe and now appears to be using them to indirectly advance its interests in post-Soviet countries. Another Kremlin-friendly European official, Hungary’s Foreign Minister Peter Szijjarto, urged the European Union to disburse a suspended aid package to Moldova, adding that the EU’s criticism of Moldova, following the canceled election, was not warranted (Reuters, August 28). This echoed the Moldovan government’s position, calling Brussels’ decision to suspend funds “incorrect,” “politicized,” “abusive” and “an interference into Moldovan internal affairs” (Gov.md, July 7).

The Kremlin is finding fertile ground in Moldova for advancing its agenda. In recent years, Moldova has increasingly begun to resemble Russia when it comes to democratic backsliding, repressive practices of harassing the opposition, limiting civil liberties, and promoting a socially conservative anti-Western discourse aided by the Moldovan Orthodox Church subordinated to the Russian Patriarchy. Hardly a coincidence, Russian Patriarch Krill is visiting Moldova during September 14–16, on the occasion of the World Congress of Families—designated by the Southern Poverty Law Center in the United States as a hate group behind a global anti-LGBT campaign, including the 2013 Russian anti-LGBT law (Sputnik.md, January 22; Mitropolia.md, August 30). The organizer and a sponsor of the Family Congress in Moldova is the Charity Foundation “Din Suflet” (From the Heart), led by the First Lady of Moldova, Galina Dodon (Worldcongress.md, August 30). The funding for the First Lady’s Foundation is completely nontransparent. President Igor Dodon only acknowledged the Turkish and Chinese embassies as sponsors, but Kremlin- and Russian-affiliated businesses are believed to provide the bulk of the funds for promoting President Dodon’s image, which does not seem to bother Plahotniuc (ZdG.md, May 24). Moldova’s pro-Russian President Dodon attended last year’s Family Congress in Budapest, Hungary—his only bilateral visits to an EU country since taking office, despite over a dozen visits to Russia (Realitatea.md, May 25, 2017). The Family Congress in Moldova, along with the visit of Russian Patriarch Krill, will mark the de facto start of the parliamentary campaign for Igor Dodon’s Party of Socialists, as elections are scheduled for February 24.

This should mean bad news for Vladimir Plahotniuc’s nominally pro-European incumbent Democratic Party. But in fact, Plahotniuc and Dodon are likely to continue their mutually beneficial political cooperation (see EDM, November 14, 2016; January 10, 2018). Despite his own party’s opposition (Timpul.md, August 14), President Dodon recently signed a controversial fiscal package adopted by the Democratic Party, granting fiscal amnesty and decriminalizing certain economic crimes, along with a citizenship-for-cash bill that Dodon had promoted last year as a way for Russian businesspeople to obtain visa-free travel to the European Union, despite EU concerns (RIA Novosti, March 17, 2017; Newsmaker.md, July 30, 2018). This helps explain why a Putin advisor suddenly welcomed Moldova’s Association and Trade Agreement with the EU as an opportunity for Russian businesses (Moldstreet.md, August 29), in spite of Russia’s strong criticism of the deal in the past (Timpul.md, June 19, 2014). In turn, speaker of parliament and Plahotniuc protégé Andrian Candu welcomed the recent appointment of Dmitri Kozak as Putin’s trade envoy for Moldova (Europalibera.org, July 19, 2018).

As Vladimir Plahotniuc continues to cling to power, the EU has begun to resist his geopolitical blackmail and increasingly rejects his anti-democratic tactics. Consequently, he is de facto cementing his political partnership with Igor Dodon, which will likely force Moldova closer to Russia, against the wishes of the majority of the country’s citizens hoping for a European future (Iri.org, July 16). At the same time, such an outcome will prove deleterious for Ukraine, which is also desperately fighting off the Kremlin’s embrace. 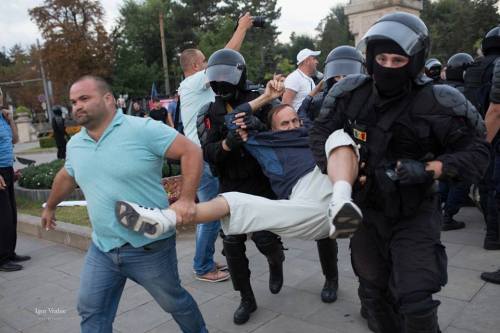 2 responses to “Is Moldova Moving Toward Russia Ahead of Parliamentary Elections?”