On January 23, 2015 Moldova finally got a ruling coalition, albeit a minority one. Leaders of the Liberal Democrat Party (23 seats) and Democrat Party (19 seats) signed a coalition agreement ending an almost two month long political thriller. After two Alliances for European Integration and one Pro-European Coalition, it was about time for an Alliance for a European Moldova. Ironically, during the last five years Moldova has become less European (more corrupt, less democratic, hardly wealthier) despite paradoxically getting a little closer to maybe sometime joining the EU. Outgoing Prime Minister Leanca promised, and many became wishfully hopeful, that Moldova would indeed apply for EU membership in 2015. However, that optimism has proven short-lived as Commissioner for European Neighborhood Policy and Enlargement, Johannes Hahn, recently suggested that Moldova, as well as Ukraine, do their ‘homework’ before applying for EU membership, otherwise, they may be up for a disappointment. Hahn’s warning was quickly picked up by Democrat leader Marian Lupu, saying that Moldova will not apply any time soon. Thus, no more false hope, no matter how self-assuring it may have been.

Indeed, with Communists as kingmakers of this minority coalition, accession talks are off the table, as are serious structural reforms. However, experience indicates that things would not have been that different with the Liberals. Transparency is likely to decrease though, as Liberals have built a reputation of whistleblowers, yet not as a result of deliberate party policy, but rather because of Ghimpu’s character traits – he simply cannot keep things to himself, much to the delight of journalists and annoyance of his fellow coalition partners. Therefore, Ghimpu was perceived as less reliable than the Communists, besides, as he had less to offer, Voronin became an obvious choice. A major test for the Liberals would be to keep Dorin Chirtoaca in the Chisinau mayor’s office following local elections this summer. Some argue that it should be easier as Liberals regained the high moral ground, hoping to run again on a bastion of freedom platform. Yet, it may prove difficult, as Chirtoaca is almost guaranteed to face Dodon in run offs, provided that the latter decides to run. As Socialists are on an upward trend, no PD and PLDM support may prove fatal.

After electing Democrat Andrian Candu as Speaker, Liberal Democrat Liliana Palihovic and Communist Vladimir Vitiuc as his deputies, question remains about the prime minister’s spot. It has been speculated a lot that current PM Leanca may be replaced by fellow party colleague Natalia Gherman. In light of Moldovan political traditions, it would make sense for Filat to promote Gherman as Leanca has become increasingly popular. As intra-party competition is a foreign concept to all local party bosses, Filat is likely to get his way. Still, on a more objective note, Communist would also welcome Gherman, as opposed to Leanca, who was often needlessly belligerent towards the Communists. Gherman may be a feasible compromise, but she runs the risk of becoming a more polished version former PM Zinaida Grecianii – deserving, professional, yet powerless head of the executive.

It is no secret that what Moldova ‘accomplished’ is, in fact, a trilateral coalition masquerading as minority government. Things will take their due course, despite some EU criticism, though it is safe to assume that many in Europe and beyond are either indifferent or approving of bringing PCRM on board, as long as it helps to contain the Socialists. For lack of a better option, Socialists have committed themselves to an intransigent opposition. They will now be free to label Communists as desperate flip-floppers, hoping, with Kremlin’s good graces, to gain most of the PCRM turf. Communists, in turn, maximized their benefits from a rather weak position. They will try to reap the benefits of governing, while pretending to be in opposition. They will mostly try to undermine the Socialists, play Democrats and Liberal Democrats against each other, poke fun at the Liberals, all the while struggling to keep the party from falling apart – a tall order, no doubt. Democrats will use Communists to pressure PLDM, hoping to get as much of the public pie as they can. Lib-Dems will struggle for a while to explain their preference for Voronin over Ghimpu, as no one is buying the early elections story. PLDM is also happy to leave the political and economic mess of the last years behind and turn a new page. Liberals will go at great length to prevent that, embarking on a four year victimization tour. Luckily, they will have a faithful ally – Romania, unless the pragmatists in Chisinau find a way to melt the German heart of one Klaus Iohannis.

We can see that all parties ultimately win as their long term interests are served well by the current political layout. Unfortunately, we cannot say the same about the voters who put their faith in these very parties. In fact, there have been emotional outcries suggesting that revoking the November 30 vote was in order. Yet, no matter how genuinely frustrated some of these civically engaged citizens may feel, there is no way to discipline any of the parties in Parliament for another four years. Even though Article 68 of the Constitution affirms that “Parliament members shall be in the service of the people” and “Any imperative mandate shall be deemed void.” Lawmakers repeatedly defy the will of those they claim to represent, without any repercussions. That is why single member district voting with the right to revoke your representative is desperately needed, but do not get your hopes up just yet. 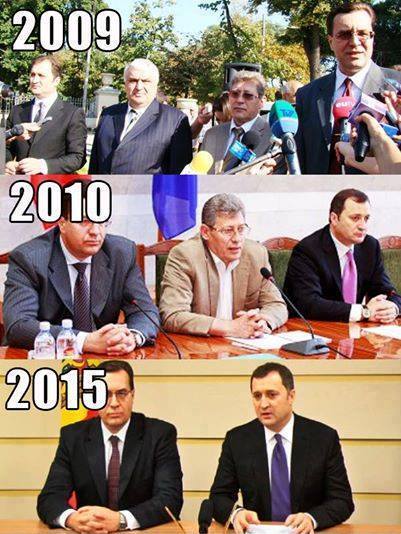 Fewer parties in a coalition is better, if it does not undermined democracy and improves governance, but who are we kidding, right?