Powerful states have meddled with the affairs of less powerful nations for as long as this distinction has been around.  So, it should come as no surprise that a country such as Russia would attempt to exert influence over its former dominions.  The surprising part is that many within Moldova are actually welcoming this interference, much like others would encourage more European and American engagement.  The difference being that, unlike Brussels or Washington, Moscow views Moldova, and to a much larger externs Ukraine, as crucial for its national interest and is prepared to defend its stake. As long as Moldova and Ukraine were muddling through transition without questioning Russian hegemony, Moscow could safely ignore the regions. Now that Chisinau and Kiev have decided to switch their allegiance to another protector – European Union, while also flirting with NATO – Moscow felt betrayed and is eager to assert itself. Kremlin is flexing its military muscle in Ukraine and its soft power appeal in Moldova.

Until recently, soft power was an exclusively western product, but modern Russia has been quick to imitate what has proven a truly sustainable and cost-effective western foreign policy tool for decades.  There is much talk about the Russian propaganda machine aka ‘Russia Today’ or Kremlin ties to certain political parties within EU countries, yet nowhere it is so obvious and straightforward as in Moldova.  Gubernatorial election in the autonomous region of Gagauzia that amounts to only 5% of Moldova’s 3.5 million people is, apparently, of great interest to the Kremlin.  Moscow has sent a commando of celebrities to endorse the Kremlin backed candidate Irina Vlah, who defected from the Communists in January right after being elected to Parliament. She joined the big winners of the election – Socialists. Vlah bet on the winning team and is likely to carry the gubernatorial race, but the thing she misses or prefers to forger is that she owes her entire campaign to Socialist leader Igor Dodon, who in turn is solely dependent on Russia. The generous endorsement of Russian politicians and celebrities alike is conditioned on towing the Kremlin line, which in the current regional geopolitical context is detrimental to Moldova’s national interest of territorial integrity and stability.  Having full control over Transnistria, a strong voice in the Moldovan Parliament (Socialists) and now gaining a foothold in Gagauzia, will allow Russia to have a blocking minority stake in Moldova’s future.  It may not be able to stop Moldova from pursuing its European agenda, but it can rock the boat hard enough to make that future a nightmare. 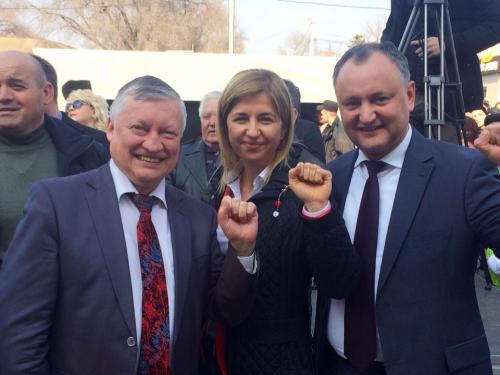 The odd part is that Moldovan politicians have contributed significantly to this state of affairs by ignoring the legitimate concerns of the Gagauz people.  The president, for instance, is yet to visit the only autonomous region in the country after three years in office.  At the same time, prominent leaders of the ruling coalition have in fact profited handsomely from rebroadcasting Russian TV channels.  Ironically, those very TV channels are promoting the socialist candidate Irina Vlah, while local owners of those channels are backing a different candidate. Just imagine for a second the level of public cognitive dissonance when the same channels strongly favor one candidate in the news reports rebroadcast from Russia, while in the locally produced news the very same channels back a different contender with the same zeal.  It is only now when they faced a real and present danger of potentially losing Gagauzia due to their own TV channels that the issue of rebroadcast came to the forefront. After years of broadcasting sheer vitriol and undermining the Moldovan state, Moldovan viewers may soon get rid of the chauvinistic TV content if big wigs in parliament decide that national security is more important than money. However, doing away with Russian news/channels would inevitably undermine media freedom. The caveat here is that Moldovan media could never compete with Russian outlets, so there is hardly any competition to begin with.  If anything, there should be more competition and better quality of local media products if alleged plans to do away with Russian propaganda materialize. Yet, this is unlikely to discourage Russia from seeking to influence developments in Moldova, quite to the contrary. It is, however, an important test for Moldova’s sovereignty.

PS: People from Transnistria, and probably a few from the rest of Moldova too, flocked to Gagauzia in a rare chance of enjoying concerts given by Russian pop starts. Apart from music, political statements about unity with Russia, purposeful innuendo about gay friendly European values have been the highlight of these concerts. It is said to see poor and desperate people being manipulated into acting against their own best interest. Then again, who am I to judge what is in their best interest…

Note: According to preliminary results, Irina Vlah won the election in the first round with 51% of the vote.