Mayoral Campaigns in Moldova’s Two Largest Cities: A Preview of Next Parliamentary Election

This Sunday, May 20, Moldova will hold early mayoral elections in the capital city of Chisinau, the second-largest city of Balti, and five other small localities. The mayoral seats in the two largest cities became vacant after the resignation of Balti mayor Renato Usatii, on February 13, and Chisinau mayor Dorin Chirtoaca three days later (Europalibera.org, February 16). Both municipal heads were facing criminal charges. On May 25, 2017, Chirtoaca was arrested for passive corruption in public procurement, while Usatii was charged, in October 2016, with ordering an assassination attempt on a controversial businessman in London, in March 2012; Usatii evaded arrest by escaping to Moscow (Publika.md, May 25, 2017; Prime.md, September 11, 2017). Both politicians have a questionable track record, but they deny the charges and accuse the leader of the ruling Democratic Party, oligarch Vlad Plahotiuc, of politically motivated prosecutions (Realitatea.md, September 6, 2017; Agora.md, January 24, 2017). These concerns are shared by the Congress of Local and Regional Authorities of the Council of Europe (Coe.int, October 19, 2017).

Despite, Chirtoaca being pro-European and Usatii being pro-Russian, both men became a problem for Moldova’s most powerful billionaire because they stood in the way of his power consolidation. Chirtoaca’s legal troubles began soon after his Liberal Party left the ruling coalition in disagreement over the change of the electoral system, while Usatii, according to polls from spring of 2016, was the most trusted politician in the country and a front-runner in the presidential race (Inprofunzime.md, April 12, 2016). In fact, the actual killer allegedly hired by Usatii confessed, in an interview on camera from his prison cell in Romania, that Plahotniuc had ordered the assassination in London, not Usatii (JurnalTV, November 2, 2017; Adevarul.md; November 3, 2017). So far, neither Chirtoaca, nor Usatii have been convicted, nor are they likely to find themselves in prison. One could argue that Plahotniuc has already achieved his goal of chasing the two mayors from their positions of power. The next objective is to ensure that the mayors to be elected on May 20 will not challenge Plahotniuc’s authority. According to polls, the top three contenders in the Chisinau mayoral race are pro-Russian Socialist Ion Ceban, Plahotniuc-backed independent Silvia Radu and a pro-European opposition candidate, Andrei Nastase (TV8.md, May 15). Whereas, in Balti, Usatii’s successor, Nicolai Grigorishin (Our Party) is competing against another Socialist, Alexandr Usatii (no relation to the previous mayor, Renato Usatii).

The importance of the mayoral elections, particularly in Chisinau, is hard to overestimate as the capital city comprises a third of the country’s population and almost two thirds of its GDP. The mayor enjoys a national political platform, which historically helped propel the opposition into power. Realizing this risk, Plahotniuc orchestrated an elaborate stratagem to replace Chirtoaca with an unelected acting mayor—Silvia Radu. Benefiting from the administrative resources of the incumbency and the generous free publicity granted by Plahotniuc’s media conglomerate, Radu became a serious contender. In order to shield Radu from Plahotniuc’s toxic image, the ruling Democratic Party insists it has no links to the acting mayor, despite evidence to the contrary. The Democratic Party paid for political advertising promoting Radu, who appointed Plahotniuc’s people to lead key departments in the mayor’s office (Newsmaker.md, April 10; Zdg.md, May 10). 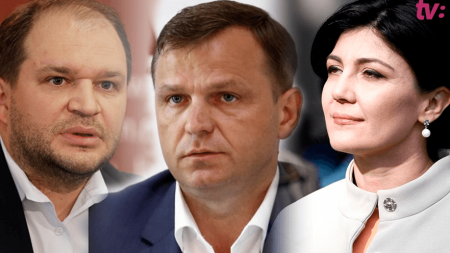 Yet, the front-runner is a Socialist member of the City Council and presidential spokesperson Ion Ceban. He can count on the Russian speaking minorities and the older generation nostalgic for the Soviet past. Having almost no competition on the left, the Socialist candidate would win if the election was decided in a single round, as is the case with single-member parliamentary districts, under the controversial new electoral law. Yet, the left has a long history of defeat in Chisinau, and Ceban is likely to lose in the second round either to Silvia Radu or the unified pro-European opposition candidate Andrei Nastase. With a high voter turnout, Nastase would be well positioned to enter the runoffs. Nastase enjoys the support of all three Moldovan political factions belonging to the European People’s Party (a pan-European umbrella grouping, drawing together the continent’s Christian Democrat and center-right political parties). Apart from Nastase’s own Dignity and Truth Platform Party (PPDA), he is also backed by the Liberal Democratic Party (PLDM) and the Party of Action and Solidarity (PAS), the most popular political party in the capital region. PAS leader Maia Sandu is vocally campaigning for Nastase, who backed Sandu in the 2016 presidential race. This unity of the pro–European Union center-right parties presents a challenge to Plahotniuc. Akin to Sandu’s 2016 experience, Nastase is being targeted by a massive disinformation campaign, ironically with the same plot of having invited large numbers of Arabs to Moldova. Not just local but also US and European watchdogs have identified it as a deliberate disinformation campaign (DFRLab, May 13; Euvsdisinfo.eu, May 15); but the damage is done.

This avalanche of disinformation spells serious trouble for the pro-EU opposition in the year-end parliamentary elections, which, coupled with questions about the integrity of voters’ lists and rampant use of administrative resources, may cast a shadow over the fairness of the election results, particularly under the controversial new electoral system (see EDM, January 10; Promo-Lex, April 19). The European Union recalled, during the recent Moldova Association Council meeting, “that transparent, inclusive and credible elections at central and local level are of key importance” (Consilium.europa.eu, May 3). The ruling party responded by setting up a legislative working group to address these concerns. Yet, just as the Democratic Party, together with the Party of Socialists, changed the electoral system to their advantage despite vocal criticism from Brussels, if the mayoral campaign is any indication, the parliamentary elections will be fought tooth and nail with little regard for democratic principles and European values.